What is: The Slimflex Range 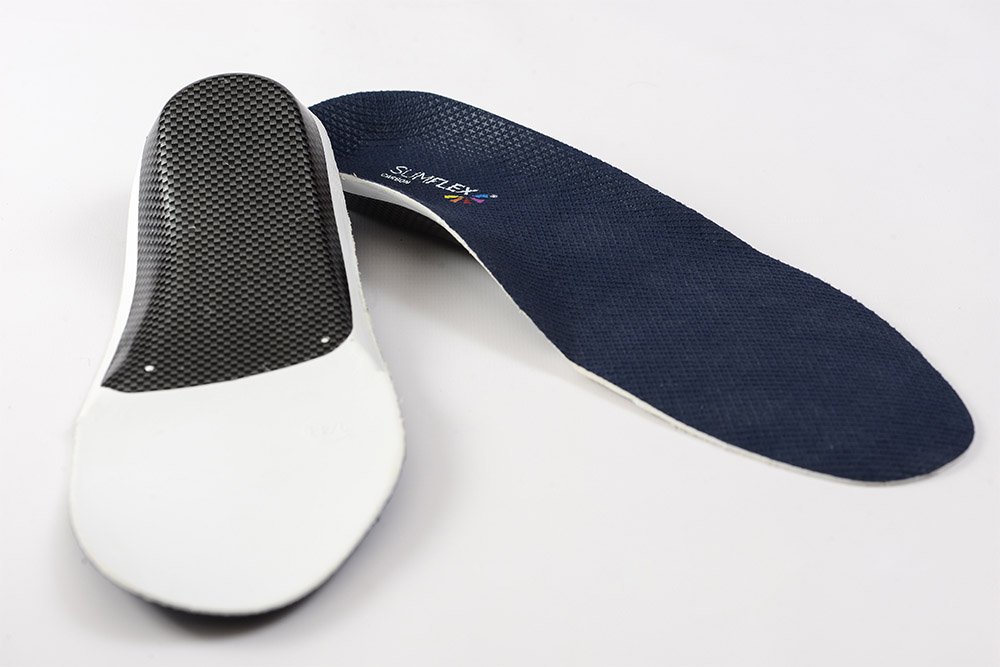 Foot orthoses have been used for the management of lower-limb and foot pathologies since the 19th century - clinical studies have shown that orthotic devices contribute to the normal function of the foot by dissipating kinetic forces during the stance phase of gait, incorporating elevated contact surfaces to correct poor biomechanics of the lower-limb, redistributing loads to adjacent foot structures through accommodative moulding3 and reducing plantar pressures in focal areas which results particularly beneficial for diabetic patients.

The most commonly used types of orthoses in clinical settings are: simple insoles, custom-made and prefabricated or off the shelf orthoses. Simple insoles are manufactured using a multi-layered approach, starting with a base, mid layer components and covering materials mainly using open and closed cell polyurethanes as well as leathers and viscoelastic polymers which provide local cushioning and minimal mechanical correction.

Custom-made orthoses are devices manufactured from a foot impression either utilising traditional plaster of Paris casts or different scanning techniques, devices are traditionally manufactured using more rigid materials such as Polypropylene or various densities of Ethylene Vinyl Acetate which provide pressure relief as well as more mechanical correction. Although in principle more accurate than off the shelf devices, their accuracy will depend greatly on several factors which are independent of the prescribing clinician not to mention the manufacturing time and potential inaccuracies with the finished device as well as the cost implications associated with their production making this not the most practical or cost effective choice of orthotic manufacture.

Prefabricated or off the shelf orthoses are non-custom devices designed to provide a neutral base offering a standard degree of support, although they are not significantly corrective on their own, in conjunction with Slimflex components they can offer a similar degree of correction as custom made devices. Algeos launched the original “1st Phase” chairside orthotic range in 1995, which facilitated the introduction of orthotic therapy, improving services by costs reduction and better users experience. Furthermore, clinical studies have shown no differences between softer prefabricated and rigid custom made foot orthoses or between rigid custom made foot orthoses and specific prefabricated foot orthoses.

The timely introduction of orthotic devices can prevent further deterioration of structures and in turn prevent associated morbidity, benefiting not only individuals but society through effective prevention of ill health. Although, the introduction of prefabricated orthotic devices with minimal or no orthotic correction could still benefit the patient, the right fitting of orthoses as well as the educational support provided by clinicians is a deciding factor when looking at orthotic therapy concordance to treatment. Thus, the effectiveness and suitability of foot orthoses greatly depends on the prescribing clinician’s ability to understand and evaluate the mechanical and functional foot pathology as well as the appropriate selection of orthoses.

Over the past few years and partly due to financial reasons, many orthotic laboratories have been decommissioned, having a direct impact on orthotic technicians and prescribing clinicians that now rely on prefabricated foot orthoses. Considering that, Algeos as leading manufacturer of foot orthoses, is committed to continue developing novel products as well as providing education and technical support to prescribing clinicians. In this vein, Algeos is preparing the re-launch of the original trusted chairside orthotic range Slimflex in November 2017.

The new and improved Slimflex range offers a range of neutral moulded EVA foam orthoses which are designed for the addition of a new range of Slimflex ‘quick stick’ components, while also accommodating traditional posting strips and orthotic additions as required by the clinician for more advanced orthotic intervention.

This approach to chairside orthotics allows for simple adaptions for less complex conditions, but also provides the flexibility to customise prefabricated orthotics extensively to the level required by the patient, not as determined by what’s included the insole pack.

At Algeos we are passionate about this clinical approach to orthotic treatment and have invested heavily in product development and supporting education to back this.